6 Tips For Staying Afloat In A Sea Of Change

How do you redesign and rebuild a boat while you’re sailing it down the river?

A lot of our clients are in this position now. If they stick with their current business model long-term, they’re going to sink. But they can’t, in effect, take the business out of the water and put it in dry dock while they redesign and re-build it. They have to keep sailing it down the river: keep the old business model chugging along and generating revenue while they determine the new business model and rebuild the business to gradually shift to the new model as the old income streams dry up. 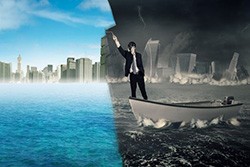 I just spent two days with a great group, the senior team of a company that’s in this position—and they’re part of a larger media company that’s also dealing with this dynamic. I was very impressed with how they’re planning to navigate this passage—I think they’ll be able to support their existing business while they’re building their new business, because they’re doing some things that I believe will specifically support their success in this transition. If you’re experiencing this “rebuild the boat while sailing down the river” dynamic in your company, you might think about whether you’re doing the following things as well as you can:

Keep the old model shipshape: One tendency, when you realize that an old business model won’t work long-term, is to more or less abandon it in favor of the “new.” For instance, we’ve all been hearing about the death of linear TV for about a decade now—and some folks who stopped putting energy into maintaining the quality of their television networks have seen their ratings drop and their revenues dry up… long before the income from new content models was enough to replace that lost revenue. It’s important to allocate the resources needed to make sure your original business stays strong and competitive while you’re figuring out how to make the transition.

Redesign before rebuilding: Sometimes people get so excited and/or panicky about a change in their industry that they just start “doing new stuff” without much rhyme or reason. The group I just worked with is doing very good job of not doing this—of thinking, instead, about how to build the foundation for their new business. They’re moving from data creation to data aggregation and analytics (better known as “big data”), and they’re being very clear about what their offer will be, what they’ll need to do in order to deliver on that offer, how they’ll go to market with it, and what they believe the financial model will be over the first three years of transition. If you don’t do this—that is, if you just start randomly throwing people and money at “new things,” it will be confusing to everyone and will sap resources from the existing business without really moving you toward the new way of doing business.

Use waterproof materials: When you start building for the future, make sure to focus on creating approaches that are simple, replicable, and scalable. If you’re short-sighted in building your new approach just to get something happening, you’ll likely regret it later. For instance, at Proteus we’re now in the midst of creating Phase I of our online learning offer; we can’t invest right now in building it out as fully as we’ll need to eventually, but we’re working with our development partners to make sure that the phase I design is a good foundation for the things we’ll want to do in phase two.

Be smart when you’re working below the waterline: If you were rebuilding an actual boat when it was in the water, you’d build in fail-safe mechanisms when messing with things that could sink the boat. For instance, if you had to rebuild the hull, you might build a secondary inner hull to contain leaks, and install a pump to then remove the water. In television, programmers are starting to make deals with the Netflixes and Amazons of the media world that could actually hurt their existing agreements with the Comcasts and DirecTVs—as well as steal viewership from those traditional paths of distribution for their programming. They’re needing to approach these situations carefully: it’s important to recognize the potential negative consequences and guard against them. while you’re building new revenue streams that could interfere with the old ones.

Be prepared to crew a hybrid: These transitions are rarely neat or simple. For the first few decades of the 20th century, there were both carriages and cars on most roads. There will almost certainly be a period (perhaps a long period), when you’re generating revenue from both models. Make sure you have people and processes in place to operate both successfully for as long as is warranted, and that the senior team is focusing on keeping both models vital. But at the same time…

Jettison the old before it sinks you. The big bookstore chains and most record labels offer cautionary tales of holding on to old models too long. Stay clear-eyed and data-focused, and when the cost-benefit of the old model starts to head south, quickly shift your focus and resources to the new model—and close the old model down in a coordinated and clear way. This may be the hardest one of these things to do well, but if you can have and then execute a clear plan for letting go of your old model when the time is right, you’ll be able to minimize damage—to people, relationships, and your bottom line—while sailing unencumbered into the future.