9 Ways To Deal With Difficult Employees

Nearly every manager I’ve ever consulted to or coached has told me about having at least one employee who’s not so great. I’ve come to think of it as an almost inevitable part of the manager’s professional landscape: there’s generally that one (or more) employee who doesn’t perform well, or is difficult to deal with, or has a hard time getting along with others, or means well but just doesn’t ever quite do what’s expected, or….

And the unfortunate thing is, most managers get held hostage to these folks, spending a disproportionate amount of time, thought and emotional energy on them. Often hovering on the verge of letting them go for years, but never quite being able (for a variety of reasons) to pull the trigger.

Here, then, are nine things that excellent managers do when confronted with a difficult employee—things that keep them from getting sucked into an endless vortex of ineffectiveness and frustration: 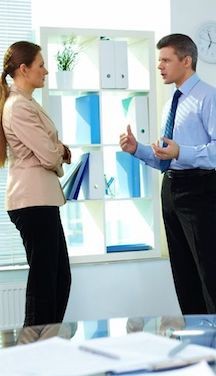 1. Listen. Often, when an employee is difficult we stop paying attention to what’s actually going on. We’re irritated, it seems hopeless, and we’ve already decided what we think about the employee—so we just turn our attention to other things, out of a combination of avoidance and self-protection. But the best managers get very attentive when someone’s not doing well. They know their best shot at improving the situation lies in having the clearest possible understanding of the situation—including knowing the tough employee’s point of view. An added bonus: in some cases, simply listening can save the day. You may hear about a real problem that’s not the employee’s fault that you can solve; the tough employee may start acting very differently once he or she feels heard; you may discover legitimate issues he or she has that need to be addressed.

2. Give clear, behavioral feedback. Most managers will spend months, even years, complaining about poor employees… and not ever giving them actual feedback about what they need to be doing differently. Yes, giving tough feedback is one of the most uncomfortable things a manager has to do. But great managers learn to do to it reasonably well, and then they do it. Here’s a postwhere I outline the approach we teach. This approach does two key things: lowers the other person’s defensiveness, and gives them the specific information they need in order to improve. Whatever approach you use, make sure it does these two things.

3. Document. Whenever you’re having significant problems with an employee, WRITE DOWN THE KEY POINTS. I can’t stress this strongly enough. Dozens of times I’ve had managers tell me that they couldn’t let a difficult employee go because they had no record of his or her bad behavior. And all too often this lack of documentation arises out of misplaced hopefulness; that they didn’t want to be ‘too negative’ about the employee (As if it would all magically go away if they didn’t write it down). Good managers know that documentation isn’t negative—it’s prudent. Remember, if you’re able to solve the problem, you can just breathe a sigh of relief and put your documentation in the back of the drawer.Be consistent. If you say you’re not OK with a behavior, don’t sometimes be OK with it. Employees look to see what you do more than what you say. If, for instance, you tell employees that it’s critical they submit a certain report by a certain time, and then you’re sometimes upset and sometimes not upset when they don’t do it…the less-good employees generally won’t do it. Pick your shots—only set standards you’re actually willing to hold to—and then hold to them.

4. Be consistent. If you say you’re not OK with a behavior, don’t sometimes be OK with it. Employees look to see what you do more than what you say. If, for instance, you tell employees that it’s critical they submit a certain report by a certain time, and then you’re sometimes upset and sometimes not upset when they don’t do it…the less-good employees generally won’t do it. Pick your shots – only set standards you’re actually willing to hold to—and then hold to them.

5. Set consequences if things don’t change. If things still aren’t improving at this point, good managers get specific. They say some version of, “I still believe you can turn this around. Here’s what turning it around would look like. If I don’t see that behavior by x date, here’s what will happen” (e.g., “you’ll be let go,” or “ you’ll be put on warning,” or “you won’t be eligible for a promotion”—some substantive negative consequence.) If problem employees don’t believe their behavior will have any real negative impact on them—why would they change?

6. Work through the company’s processes. Good managers hold out hope for improvement until the point when they actually decide to let the person go. AND they make sure they’ve dotted all the I’s and crossed all the T’s that will allow them to fire the person if it comes to that. If you’re at this point in your efforts to address the situation, you ought to be having very clear conversations with HR so that you know (and are doing) exactly what you need to do to clear the path to termination, if that turns out to be necessary.

7. Don’t poison the well. All too often, poor managers substitute bad-mouthing the problem employee to all and sundry rather than taking the steps I’ve outlined above. No matter how difficult an employee may be, good managers don’t trash-talk to other employees. It creates an environment of distrust and back-stabbing, it pollutes others’ perception of the person, and it makes you look weak and unprofessional. Just don’t do it.

8. Manage your self-talk. Throughout this process, make sure your self-talk is neither unhelpfully positive nor unhelpfully negative. Thinking to yourself, “This guy’s an idiot and will never change,” isn’t useful, nor is thinking, “Everything will turn out fine, he’s great, there’s no problem.” Good managers take a fair witness stance, making sure that what they say to themselves about the situation is as accurate as possible. For example, “His behavior is creating real problems for the team. I’m doing what I can to support him to change. If he does, great, and if he doesn’t, I’ll do what I’ve said I’ll do.”

9. Be courageous. Firing someone is the hardest thing a manager has to do. If it gets to that point, do it right. Don’t make excuses, don’t put it off, don’t make someone else do it. The best managers do the tough things impeccably. And if—hallelujah—things turn around, be courageous enough to accept that; sometimes being proved wrong when we think someone’s not salvageable is almost as hard as being proved right.

If you learn to use these ‘good manager’ approaches when you have a difficult employee, then no matter how things turn out, you’ll end up knowing that you’ve done your best in a tough situation. And that may be the best stress reducer of all.