Being Your Own Support System

Last week I had the pleasure of spending a little bit of time with a lot of wonderful women. As a part of the Rising Leaders leadership intensive we teach for WICT (Women in Cable Telecommunications) twice a year, I conduct 30-minute “mini” coaching sessions with 50+ women, all of whom are high-potential midlevel cable executives.

In more than half of these individual sessions, we end up focusing on self-talk—that little voice that runs in your head non-stop. I’ve discovered, over the years, that many (perhaps most) of the problems we run into in our lives have something to do with how we talk to ourselves about situations. Learning to manage your own self-talk is one of the most useful tools you can have in your self-development toolbox.

Let me give you a poignant and powerful real-life example. Three of the women I spoke with—very bright, accomplished women—were convinced that they were doing badly at work, that no one was supporting them, and that they were sure to fail.

For all three, the facts contradicted their fears: all had been recently promoted; had been nominated and sent to the program by their boss and HR (a big investment for their company); had gotten great performance reviews; and had scored well on the interpersonal and leadership assessments we provide as part of the class.

So, what was the deal?

All three women had awful self-talk. That voice in their head was using them as a chew toy. “You’re doing a terrible job” that voice was saying, or “No one wants you on the team,” or “There’s no way you can succeed.” And, because they were largely unaware of what they were saying to themselves, it was affecting them on a daily basis like pollution leaking into a water system..invisible and deadly.

We taught these women our model for bringing your self-talk to your conscious awareness and revising it. It’s dramatically powerful: whenever you feel hopeless, helpless, defeated, incompetent, or overwhelmed, managing your self-talk about the situation you’re in is almost sure to help. Here’s how it works: 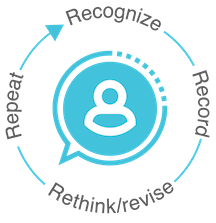 Recognize: The first step in managing your self-talk is to “hear” it. Unless you’re aware of this internal monologue, it’s impossible to change it. Start by simply recognizing what you’re saying to yourself. For instance, let’s say you’ve just gotten a promotion. Rather than being thrilled, you realize you’re feeling anxious and overwhelmed. When you focus on your thoughts about the promotion, you might hear something like, “There’s no way I’m qualified for this—it will be a disaster.” As soon as you “hear” what you’re saying to yourself, that sense of hopelessness or overwhelm makes sense—you’re believing that negative voice in your head.

Record: Writing down your self-talk creates a useful separation; when you see it written down, it feels less like an intrinsic part of you. If you write down that self-talk statement, above: “There’s no way I’m qualified for this—it will be a disaster,” you’ll be better able to look objectively at how this negative self-talk affects you: perhaps making you more likely to abandon the project, or to feel cynical or hopeless about the possibility of accomplishing it.

Revise: After you’ve recorded any inaccurate, unhelpful self-talk, you can decide how to “rethink” it. This step is the core of the process. Your goal is to create alternative self-talk that you’ll believe and that will lead to a more useful response. For instance, if you try to substitute self-talk that’s falsely positive, like, “This will be a piece of cake,” you simply won’t believe it, and therefore it will have no impact on you: you’ll just revert back to your original negative self-talk. What could you say to yourself instead, that’s believable and that would create a more useful response? How about something like: “I know this will be a challenge. But I’m good at learning new things, and I’m really motivated.”

Repeat: Like any habit, managing your self-talk requires repetition. Substituting more hopeful and accurate self-talk for your negative self-talk will be helpful the very first time you do it. And you’ll need to consciously do it again the next time the voice in your head comes up with a similarly unhelpful statement. And again. This is a process for creating new habits of thought. Whenever you find yourself falling into a pattern of unhelpful self-talk—either overly negative or overly positive—consciously substitute your revised, more realistic and accurate self-talk.

So that’s it. Until you try it, you may not see see how powerfully helpful it can be. Think of it this way: imagine if you had a ‘friend’ who was saying the kinds of unsupportive, unhelpful, negative things you sometimes say to yourself, would you just nod and accept it? I hope not. By learning to manage your self-talk, you can make sure you’re not getting in the way of your own success and happiness.