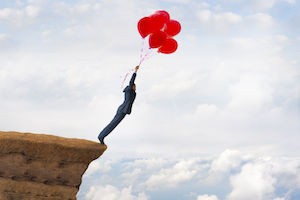 When someone says the word “courageous,” we generally think first about physical courage: rushing into a burning building to save a child; going toe-to-toe with a bully.

For a leader, though, true courage most often consists of making a tough emotional or psychological choice: doing something that’s personally difficult for the good of the enterprise.

For example, in 1982, seven people died after taking Extra-Strength Tylenol capsules; the capsules had been removed from store shelves, laced with potassium cyanide, and returned to the shelves. Even though Johnson & Johnson clearly wasn’t at fault, CEO James Burke did the courageous thing. Within days, once it had been established that tainted Tylenol caused the deaths, Burke issued a massive product recall of more than 31 million bottles, and decided not to put the product back on the shelves until new, tamper-resistant packaging could be devised. Burke made these decisions in the face of some resistance from his own board, who thought that a regional response would be sufficient, and that a recall might be tantamount to an admission of guilt.

Contrast Burke’s response with Tony Hayward’s unfortunate choices after the BP oil spill in the Gulf of Mexico in 2010. His repeated refusal to take responsibility came across as deeply cowardly and un-leader-like.

This is my third post about the qualities people look for in their leaders (the first two focused on the attributes of far-sighted and passionate). We look for courage in our leaders because, as in the case of Burke and the Tylenol scandals, we want to know that our leaders are going to do what’s best for the collective even when it’s hard for them personally.

And we want to see this kind of courage not only in big world-changing circumstances, but also in the day-to-day. We’re particularly sensitive to whether or not our leaders are making necessary decisions that we know are outside their own personal comfort zone. For instance, if we know that a particular leader hates personal confrontation, and we see that person firing someone who needs to be let go but is likely to be resistant—even publicly so—that reads as courage to us. On the other hand, if we know a specific leader has no trouble firing people (that in fact his or her comfort zone might err in the direction of too-quick tough action), and we see that person pausing and gathering more information before rushing to judgment—that will read as a courageous act for that leader. Again, we want leaders who will take necessary actions that are personally difficult for them: we interpret that as meaning that they’ll put the success of the enterprise ahead of their own ease.

I’d love an example from your experience—business or personal—of a courageous leader in action. What tough choices have you seen people make—and how did it affect those around them?