How to be Brave Enough to Change

A few years ago, at an author conference, all of us who were there—about 150 business authors from all over the U.S.—lined up to break a 1.5-inch thick piece of pine using a classic karate chop. I got in line right away—I wanted to just do it, rather than think about it too much and get wrapped around my own mental axle—and was successful on my first try. I was pleased; I had followed the instructions I was given, to focus my attention on the far side of the board and follow through without hesitation, and it worked. 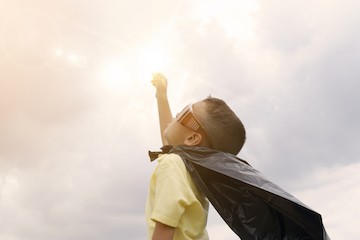 Then I sat and watched as everyone else tried it. It took one friend of mine three attempts to break her board—and it was entirely clear to me, watching, why. I could see her hand slowing down, losing momentum just before she connected with the board on her first and second tries. She was on an almost invisible level, second-guessing herself.

Over the past couple of years, as we've been helping more and more of our client companies make dramatic changes—in their business model, structure, culture, go-to-market strategy—I see this dynamic played out over and over on that bigger stage. When CEOs and their teams fail to fully commit to change, change fails. As I saw with the board-breaking exercise, it requires a kind of in-the-moment bravery, a willingness to let go of your timid interior monologue (What if it I fail? What if this isn't the right thing to do? What if it's not possible?) and go all-in. It's scary to commit to a new course, especially one that's very different from your current course.

We have lots of examples to draw from, of companies that have committed or not committed to change—and what has happened has a result. I offer as a cautionary example Barnes & Noble. In 2010, Barnes and Noble promoted the head of their website, William Lynch, to be the new CEO. From what I understand, he realized the company needed to make a huge pivot into electronic book sales and away from their big-box stores in order to be competitive with Amazon. But the company started second-guessing itself when they didn't see immediate results, and turned back to what they knew: investing in more extensive in-store cafes and non-book merchandise, and not making the needed investments to grow their online bookstore. They just weren't brave enough to carry through with the necessary changes in the face of difficulty. Lynch resigned in frustration in 2013. And it looks to me like they're still struggling to identify a path and commit to it: they've recently announced they're putting full-service restaurants in some of their stores; they've spent three years dithering about what to do with their Nook e-reader; and they are on their third CEO since Lynch's departure.

For a great alternative, a "commit and be brave" example, I offer Netflix. Like Barnes & Noble, they watched as their customers began to consume their product in a new way. But unlike B&N, they decided how they needed to change, and they—bravely—followed through on their decision. In 2011, Netflix CEO Reed Hastings decided with his senior team to shift their core business model from DVD-by-Mail to online video streaming. They began to make all the hundreds of structural, process and people changes needed to make that happen. And then they ran into a buzz-saw. As part of their change, they had decided to make current subscribers pay for both services—and charge them more. There was an avalanche of bad press, and their stock price took a tremendous beating. Hastings and company reacted almost immediately, making the transition easier and less cumbersome for customers, but—and this is my point—they didn't back off the core change they had decided to make. Their courage carried them through that change, and then through the next one: deciding to offer their own original content as a way of avoiding commoditization in an increasingly on-demand world.

So, how can you be brave in going through change? Here are three ways to build your courage, so you and your colleagues can move successfully to the new reality:

1. Don't wait for perfection. From what I understand, Barnes & Noble kept re- re- re-writing their plans, looking for the perfect balance of supporting their existing business while building their new, electronic business. When planning how to change, remember that no plan is perfect—and you can't even guarantee ahead of time which plan will be the best. Do your homework (see #2 below), come together (see #3), then commit and implement. Once you've made the change, stay attentive, so that you can revise quickly (as Hastings did) if needed—but understand that you'll only know what you need to change when you see how it's working. So breathe deeply and carry through.

2. Be a fair witness. Many companies, when faced with the need to change, talk themselves out of it. They only look at the information that makes it seem as though they're doing OK, or they mono-focus on one part of what's needed. It's much harder, but infinitely more useful, to look dispassionately at your situation, and to ask real questions about what you see to make sure you're understanding it fully. I'm convinced that approaching a change situation with this kind of neutrality and curiosity is the only way to be able to see a clear path forward. I just sat in on a meeting recently; a brave CEO client of mine had an industry analyst come and tell them how their company is perceived by the investment community, and what investors think they should be doing differently. It was not an easy thing to hear. They listened carefully, and didn't try to dismiss any of what they heard—and it further clarified their commitment to making the needed changes.

3. Stick together. Big change is very scary for most people. And when people get scared, they get self-protective. Because of this human tendency, people can definitely turn on each other when the going gets tough. I've observed that when a senior team gets caught in this dynamic of fighting with and protecting themselves from each other, it does not leave them with enough energy to lead through the change. It's up to the leader to set the expectation of support—and to model it him or herself. Just a few weeks ago, I facilitated a meeting where another brave CEO, on the cusp of dramatic change, let his team know that he had their backs, and that the main thing he expected of them through this change was to stick together and support each other. He told them that if they had issues with the direction they were headed, he expected them to bring those issues to the team, and if any of them had an issue with someone else on the team, he expected them to bring it to that person. They left the meeting much more on the same page than when they had started, and—I believe—much more aware of the power of operating together as a strong team through this change.

Moving successfully through change certainly requires more than these three things; once you've committed to a change, for instance, it's critical to support everyone else in your organization to move through the change with you. But successful change starts with personal courage—and without that, it simply cannot happen. I support you in being brave, and I wish you good fortune in breaking your boards, both personal and professional.