How To Get People To Agree With You 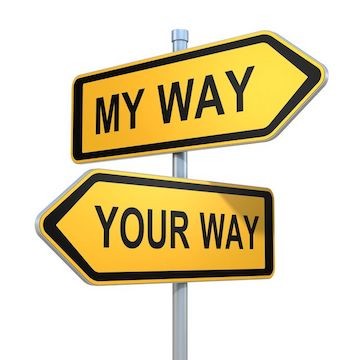 I know someone who really cares about being right. Now, in fairness, I haven’t had much interaction with this person over the past five years or so; he may have changed. But when I knew him, his main focus in most conversations was to convince the other person that he (my friend) was right.

This person (let’s call him Sam) didn’t know how to let a disagreement stand; the phrase “let’s agree to disagree” simply wasn’t a part of his vocabulary—or his mindset. For example, once Sam and I were talking about taking herbal supplements: he was a big fan, I wasn’t. For him, it wasn’t enough that I acknowledged that he might find them helpful—he wanted me to agree with him that it was important for everyone to take them, including me.
Finally I had to say, “Sure, fine, I’ll try them,” just to end the conversation. He may have left feeling that he’d changed my mind—while for me, it was merely exhausting and frustrating. (And I actually felt less open to his opinion than at the beginning of the conversation.)

Getting others to agree with you isn’t a matter of bulldozing them into submission; insisting on your “rightness.” In fact, that most often backfires: you may get them to say some version of “Sure dude—whatever,” but that doesn’t mean you’ve convinced them of your point of view.

So, what does work? How do you get people to be open to what you’re saying to them?

The single most useful way to increase the likelihood of people agreeing with you is to frame it in your mind as “offering them a possibility.”

When you think of it that way, you’re much more likely to do the following:

Build awareness: Think of the last time someone told you about something that really captured your attention in a positive way. There were probably a couple of elements at play. First, you probably felt open to the person, and felt that his or her motivations were positive. Second, the person was most likely personally engaged with the thing. You sensed that he or she was endorsing it, not simply presenting information, and at the same time, he or she wasn’t strident or insistent. It was more an offer of insight than a demand that you accept his or her point of view. Finally, the person probably provided examples or stories of the thing’s efficacy, uniqueness or value.

A few years ago, I was getting a manicure and the polish I was considering from the salon’s selection was a new brand for me. The aesthetician, with whom I’d already made a nice connection, complimented my color choice and noted that this was a new brand she’d just started working with, and that it was both lower in chemicals and longer-lasting than other brands. She then told me a great little story about getting her boyfriend, who worked in an automotive shop, to let her paint one of his nails so she could test the polish’s staying power under “high-stress conditions,” and that it had lasted a week. She didn’t try to convince me to buy it. She was simply sharing her positive experience with it. I found it a very attractive introduction to a new product.

These same elements of awareness work well when inviting people to consider any new idea. If they feel positive about you, if you personally endorse it without being dogmatic, and if you provide real-world examples or stories of how this process has been helpful in similar situations, people will be more likely to be interested in and open to your message.

For instance, up until about ten years ago, I knew that I “should” exercise. I was informed about all the benefits, and I was well aware that it was increasingly important to my health as I aged. I just didn’t connect with it personally. The benefits were very abstract to me. Then, just after I turned fifty, my siblings and I went to celebrate my mom’s 80th birthday. Two things happened. I saw how frail and weak my mom was—this was a woman who had never exercised since she stopped chasing around after us as little kids—and I saw how wonderful my sister looked. She’s only a few years older than I am, and she had recently lost quite a bit of weight through exercise and eating healthier. The contrast between her renewed vitality and beauty and our mom’s increasing ill health finally made it real for me—without exercise; this. With exercise; that. Click: I got it.

So, how can you help people have that “click” about your idea? I’ve noticed that people tend to be motivated to change when they’re offered—as I was—a clear example of the personal rewards of behaving differently and a clear example of the personal “anti-rewards” (the risks, hazards or difficulties) of continuing to behave in the same ways. It doesn’t always work, but it seems to work better than anything else.

Let Go and Listen: This is—for most people—the hard part. Once you’ve let someone know why you think something is a good idea, or the best approach (awareness), and how it will benefit them (motivation), stop “telling” and start asking. Remind yourself that you’re simply offering them a possibility; you have no power to make them accept it. Ask, for instance, “So, what do you think about this?” and then truly listen: get genuinely curious about their point of view. If they ask you more about your idea or belief, answer their questions—but remember that you’re offering, not insisting.

By taking this approach, people still won’t always see things your way—but the odds are much better that they will. And even if they don’t agree with you this time, you’re building a reputation as a reasonable and flexible person, vs. someone who’s dogmatic and rigid. Which is a much better place to start from in any conversation.