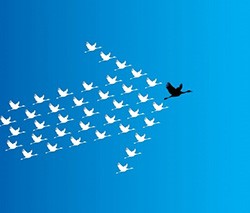 I originally wrote this post at the end of 2009, when I was just starting to work on writing Leading So People Will Follow. It’s still a good summary and explanation of the concepts in the book—I thought you might find it useful:

I’ve been thinking about leaders lately, and how good leaders are going to become increasingly important as everything in business gets flatter, faster, more disrupted. I’m noticing more than ever before how essential it is for organizations to have strong and flexible leaders in order to succeed. I watch as those organizations whose leaders are too inflexible, too cautious, too short-sighted or too fear-based continue to founder, while those whose leaders are far-sighted, passionate, courageous, wise, generous, and trustworthy seem to be finding their way much more quickly and easily.

And it just so happens that we at Proteus have and use a leadership model based on those six qualities, so it’s reinforcing our sense that these truly are the essential characteristics of good and effective leaders. We evolved our model based on “leader stories” from all over the world, going on the premise that folk and fairy tales tend to carry the “DNA” of our cultural expectations about what good leadership looks and feels like. If you’re interested, here is a little more explanation about the six qualities as they show up in these leader stories:

In these stories, the young leader-to-be can see beyond his current situation to his ultimate goal (save his father, win the princess, kill the monster), and can express it clearly and in a compelling and inclusive way—especially those whose help he needs—even when others lose sight of it, believe it’s impossible, or ridicule him for trying. He is Far-sighted.

Moreover, the leader-in-training doesn’t just go through the motions. He is deeply committed to his quest. His every action is directed toward achieving it. Nothing dissuades him, even the inevitable setbacks and disappointments attendant on any quest. He may not be loud about it, but he is relentless. He is Passionate.

Throughout the story, he is confronted with difficult situations. He may be afraid and lonely; he may feel like running away, longing for the comfort and safety of home. He often faces situations that are particularly trying for him personally. But he doesn’t turn aside; he doesn’t (unlike his brothers or others who attempt the same journey) make the safe and easy choices. He doesn’t wimp out. He is Courageous.

He’s not a cardboard action hero, though. His brain is tested, and he must be able to learn from his mistakes. In many versions of the story, he doesn’t initially follow the advice given him, and his mistakes create complexity and danger. The next time a similar situation arises, he behaves differently and succeeds at his task. He doesn’t deny or whine or blame; he improves. Finally, he uses his powers of discrimination to think through difficult choices and arrive at the best and most moral solution. He is thoughtful, appropriately humble, clear-headed and curious. He is Wise.

Along the way, the future leader meets people or creatures in need, and he helps them or shares with them even though his own supplies are low; even if helping them takes him out of his way or slows him down. In some versions of the story, he actually has to seem to sacrifice his life for those he loves or to whom he owes his loyalty (this always turns out OK in the end). And later on, when he is king, his people are prosperous and happy because he rules with an open hand—the leader is not stingy, miserly or selfish. He is Generous.

Finally, and perhaps most importantly, his word is his bond. If he tells his dying father that he will find the magic potion to cure him, you know that he will. If he tells the princess that he will come back to marry her, she can send out the invitations. The hero does not equivocate or exaggerate. He is Trustworthy. When leaders demonstrate these attributes consistently, they become a strong, safe point around which teams and organizations can coalesce. Their people turn to them and say, We’re with you—let’s go. And great things happen.