"Nice To A Fault"

I work at a small liberal company where nepotism runs rampant. Of the less than 75 employees, I can probably name about 25 people who are related to someone within the company, either directly or indirectly. That has never been a problem for me, as it never directly affected me… it was more or less an annoyance, if anything, due to the utter fact that the positions given were never properly and fairly earned.

Though I’m a self-described introvert, I am very nice and friendly, at times, it even pains me being the initiator. But I live by the golden rule of “treat others as you’d like to be treated.” I’ve always gotten along with every one, but never belonged to a clique. I don’t like attention drawn to myself, but I do socialize, participate and attempt to get to know my coworkers, so that it’s not entirely impersonal. I used to feel like I should at least make friends at my work, as I am here 9 hours of my waking day. As so, I did, or I thought I did, with several others.

Recently a VIP’s sibling (Veronica) has been hired on. I always try to make “newbies” feel welcome—as I hate anyone feeling singled out or left out. Veronica is hard to get to know. (Hindsight, I never thought much but now I see her as cynical, spoiled, and arrogant.) I tried to get to know Veronica and even attempted to also invite Veronica and several other coworkers to social events I either knew of, or was hosting. Initially all was fine and dandy, and I felt we were all getting to know each other and were friendly, to the point, that I felt good about my “friends from work.”

Lately, however, I noticed that Veronica started becoming better friends with one of the gals (June). That’s when it started. I’ve always known there to be “exempt treatment” for relatives. Veronica would come and go as she pleased (though there are official hours of operation), taking naps on company time, calling the President or VP by silly pet-names, charging expenses to the company, etc. I overlooked this, as there was not much I could do, seeing it for what it is. I was still nice and cordial regardless of all this.

However, since the worshiping of June began, I find myself being on the ridiculing end of all the high-school drama (we’re in our 20s-30s). Mean words are now directed towards me, insensitive comments thrown my way, snide remarks, etc., all from Veronica. It started out small. Veronica would audibly, verbally invite June and others to a party or to go out on the weekends, but not directly invite me, even though I was sitting right there with everyone in the same room. Lunch plans would be made, and somehow I was conveniently left out. Coffee runs would be made, and somehow no one seemed to remember my morning ritual of coffee. This would happen quite frequently, to the point that it started to take it’s toll on me. My feelings are hurt because I wonder how, I, the person that went out of my way to try to make her feel welcome and included, would be treated this way. I’ve never been anything but nice and friendly. One time, Veronica flat out disrespected me in front of a coworker, and the other gal did nothing. She simply turned her back and went in the other direction.

The girls in this group, now a clique, have suddenly now excluded me in all their social events. I have not figured out why this is so, and maybe I will never know. If and when I wear something cute to the office, Veronica would say in a catty tone that I looked nice, but if someone else wore something cute, she’d make a huge racket of it all. Don’t get me wrong… I do not dress to impress other women… I dress to feel good for myself. I don’t need approval from others how I dress, but I certainly wouldn’t want to be called derogatory names either, therefore my wardrobe is in good taste. Veronica, however, always wears shockingly non-corporate attire: mid-thigh skirts, tube tops, halter tops, cleavage-bearing attire, etc.

This behavior has escalated to negative statements about me and my “non-existing” self-esteem, my “smelly and disgusting” lunch (I’m vegetarian), my “nasty” food, my “exercising” too much, etc. I thought that maybe because I do not smoke and have high morals and ethics, that I’m now seen as too much of a goody-two-shoes.

My question is, how do I go about this? I shamefully admit that I’ve cried over this torment as it hurts my feelings so much and that it has made me feel less of a human being. As I stated, I’ve never been anything but friendly and nice to all these people in the social group.

I’ve taken it upon myself to consciously steer clear of them. But I cannot help but feel phony and disrespecting myself when I am nice to these people. I dread Mondays as I have to be near them all and being on the sudden outcast. I dread Friday as, again, I’m on the receiving end of not being invited to the events. It has eaten away at me and I find myself stressing over this… as I see it, it is just a workplace. I am here to work and to do a good job at my work, and I do. But it also is 9 hours of my waking life each weekday, and it makes it hard. Finally, no, I cannot bring up this behavior, for risk of being unfairly relieved of my much-coveted position.

Thanks for any advice, 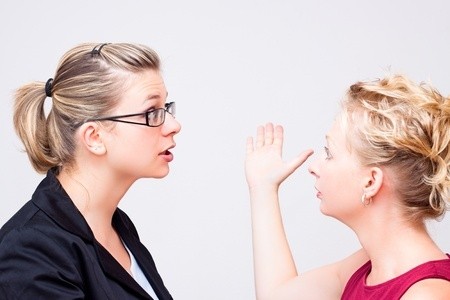 Dear Nice to Everyone

Oh boy. It sounds like you feel completely trapped in this situation. So let’s start by just doing a bit of a reality check, and assessing your options. You really only have four choices: 1) you can stay and accept the situation; 2) you can stay and continue not to accept it (e.g., be upset every day); 3) you can leave and find another job; 4) you can stay and try to change it. That’s it.

I can almost hear you saying, “But wait—why is this my responsibility? Can’t you do something about it, Office-Politics? Shouldn’t somebody other than me…?” Sorry, no. It’s not fair, it’s not just, it’s not right: but it’s extremely unlikely that anyone else is going to fix this for you.

OK, I’m going to assume that you can’t or don’t want to do any of the first three (stay and accept, stay and be freaked out, leave). That leaves trying to change the situation. Now, at the very end of your letter, you say, “No, I cannot bring up this behavior.” I hope you mean you can’t talk to HR, or to Veronica’s boss, for fear of repercussions, rather than that you’re unwilling to say anything to anybody about this!

If you are willing say something, I have a suggestion—it will require bravery on your part, but it has a high potential for change. Next time Veronica makes a mean or disrespectful remark to you, look directly at her, and calmly and clearly say, “Veronica, I’d like to ask that you not make negative remarks like that.” Period. Stop talking and keep looking at her. Resist the temptation to continue; you don’t need to apologize, or let her off the hook in any other way. You also don’t need to tell her how her behavior makes you feel; given what you’ve said about her, it probably won’t help, and she may see it as a sign of weakness on your part.

Now, she may try to slither out of it by telling you that she was “just joking,” or that you’re “too sensitive.” Just keep looking at her, calmly, and when she finishes speaking, say, “OK, I’d still like to request that you not make negative remarks like that.” And that’s it. If she does another round of “just joking,” etc., simply smile, nod, and walk away.

It’s kind of like disciplining a very small child: the keys are calmness, consistency, and clarity. You’re the grown-up.

The beauty of this approach is that you’re not complaining, you’re not whining, you’re not—in fact—doing anything that could be construed by “the powers that be” as negative. You’re simply making a respectful and legitimate request: it’s a very strong position without being confrontational.

See how it goes…

Good luck! Thank you for writing to Office-Politics.

Subscribe to add to Collection View Collection More from Erika on Office Politics.com