Overwhelmed By Change? These 4 Things Can Make It Easier

I was talking to a client over the phone yesterday, and she was telling me how exhausted everyone is in her organization. They’ve been experiencing a tremendous amount of change recently—they’re in the media business, which is undergoing seismic shifts on a daily basis. They’ve been involved in massive technological and structural transformation for the past few years, and now they’re getting a new leader, as well.

At one point, she said, “Will we ever get to just catch our breath?”

And my answer: “Probably not.”

Change is the new black. That is, change on every level has become the new day-to-day reality of business, and I don’t think we’re going back to the era where organizations initiated some kind of “change process” every few years and then went back to the status quo for awhile. And unfortunately, most people really don’t like change, and they become (as my client noted) significantly less productive and happy when they’re at the effect of change, especially big, unrelenting change. 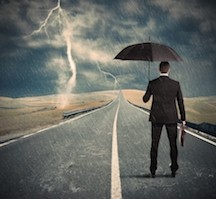 When we help clients through major changes, we generally introduce them to William Bridges’ great, simple transition model, an approach to understanding what people go through when circumstances change around them. Over the years, as we’ve worked with Bridges’ model, we’ve also developed four “change levers”—four steps you can take to help people move through the mental and emotional stages of transition more smoothly and easily. Here are our change levers:

Increase understanding: My dad used to have a cartoon tacked on the bulletin board in our kitchen: a drawing of an anthropomorphized, disgruntled-looking mushroom, with the caption, “They must think I’m a mushroom. They keep me in the dark and feed me s…t.” I thought it was funny when I was a kid, but now I see the truth in it. This is what most people feel like when they’re in the midst of corporate change: that no one is telling them the truth, and they don’t have any clarity about the bigger picture. And when someone feels “in the dark,” it’s very hard to stay productive and positive; fear takes over, rumors abound, and people hunker down in self-protective mode.

By being as transparent with your folks as you possibly can, about what’s happening and why, you can significantly decrease fear and the acting out that arises from it. For example, let’s say your company or department is making significant changes in the way you market your product to customers. You can simply mandate that, and hope that people go along. They may—but the mushroom effect will almost certainly create suspicion, resistance, and confusion. Or you can let everyone know what problem(s) you’re trying to solve by making the change, why you think this is the best approach, and the impact the change will have on them, day-to-day. The more you increase people’s understanding about the change in these ways, the more likely they will be able to accept and operate in the new reality.

Clarify and Reinforce Priorities: In TV movies about catastrophes—earthquakes, volcanoes, alien invasions—the most successful heroes are those who cut through the chaos by saying some version of, “OK. What we need to do first is…” The nature of change is that it feels chaotic, especially at first. When we’re confronted with new people, new models, or new ways of doing things, it’s hard to see the patterns.

If you can help people understand what’s most important in times of change, it’s both dramatically soothing and supportive of success. And if you can then reinforce those priorities by focusing on them yourself, by reiterating them when people get confused, and by making sure that key people around you have internalized and are working toward them, things really start to calm down and move in the right direction. (You notice, in the catastrophe movies, once the hero has everyone doing something useful, it starts to feel like things are going to turn out OK.) In the example above about a new marketing approach, this would involve letting people know how the change will unfold, and what they’ll need to focus on now, in a month, in three months, in order to make it work. With this lever, you’re helping people create new patterns.

Give Support: One of the major problems with change in organizations is that it happens at different times for different people. Senior managers usually know about a change first, and have time to get their heads around it and make peace with it (to a certain extent) before they communicate it to their folks. So, generally, by the time they communicate it to their folks, they’re ready to go—and they assume their employees will be, too. And then when their employees are understandably upset, feel hesitant, or have questions, managers conveniently forget that they had exactly the same reaction when they found out about the change a month ago—and complain that their people are “uncommitted,” ”resistant,” or “have no sense of urgency.”

The essence of giving support in change lies in having empathy for what people are going through. If you, as the manager and leader of change, can resist your own tendency to judge your folks’ reactions, and can—instead of trying to cajole, reassure, or bully them into being OK with the change—simply listen to their concerns, they’ll be able to process and move through the change on their own much more quickly. In addition to simply listening, you can also give support by making sure that people have the resources they need to make the change (equipment, process flows, dedicated time, etc.) and that—insofar as possible—you’ve removed any organizational impediments to making the change (rules or procedures that don’t support it, people who don’t understand what’s happening, tools that aren’t set up to use in the new ways).

Give Control: Let’s say you’re walking into the ocean, pleasantly up to your thighs in cool water, and suddenly—there’s an undertow. The scariest thing about this is the loss of control—you can’t get your footing, the pull is invisible, you don’t know what’s happening, how strong it is, or where it will take you. In times of high change, people feel out of control in the same ways: that they’re in the grip of forces they don’t understand, and they’re not sure what will happen next. Doing the first three things we’ve talked about—increasing understanding, clarifying and reinforcing priorities, and giving support—will help a great deal.

Finally, though, you can actually give people more control over the situation. When I say this to managers, their immediate response is often, “I don’t even have any control over this—how can I give my people control?” But when you break any change down into its smallest component parts, there are almost always lots of small-to-medium decisions or actions over which you can give your employees more control. For instance, in the example above, rather than saying, “Let’s get your team together on Thursday morning and walk them through this in the way I’ve just shared it with you,” you might give that person more control by saying, “We need to make sure everyone in the department knows about the change by the end of the week. How and when would you suggest we communicate the change to your team?”

And there’s a whole additional level of benefit to approaching change in this way. I find when I’m focused on creating more understanding and clarity about priorities, and giving more support and control to others—it soothes and focuses me as well. And then I’m more likely to be that leader who is the strong, calm point around which the team can coalesce, so we can all surf the constant waves of change as gracefully and successfully as possible.