What Do Great Leaders And Movie Heroes Have In Common? 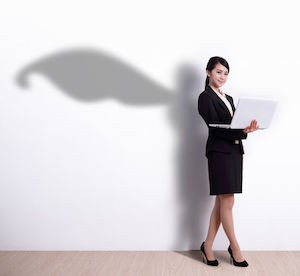 Imagine a scene in a movie. One person is about to give something to another person, and that handoff is key to the success of whatever’s happening at this point (stopping the aliens, stealing the villain’s secret, opening the mystic portal). The thing-to-be-handed-off is important to the first person, and he or she is reluctant to part with it. If the movie’s a comedy: Person One holds out the object as if to let it go; Person Two reaches for it; Person One doesn’t give it up—and a hilarious whispered struggle ensues. If the movie’s an action film: Person One hesitates; Person Two (usually the hero) snaps, “Give it to me, dammit!”; Person One throws it over, angrily. If it’s a drama: Person One looks at the object with sadness and hands it to Person Two with an air of deep regret; Person Two thanks him/her in a heartfelt manner. It’s such a common meme that you know exactly what I’m talking about.

Really, this scene is about delegation: handing over the responsibility for completing important work to someone else. And, since it shows up in thousands of movies, books and TV shows as a difficult thing to do, I think it’s safe to say that delegation is something that most of us find not that easy.

What’s so hard about delegating? All the things that are captured in these familiar scenes: we like doing the thing; or it feels like part of who we are; or we wonder what will be left for us to do if we’re not doing it; or we’re worried that the other person won’t do it well.

If you’re a manager, and you’re not delegating for any of these reasons, you need to have an honest conversation with yourself, and then you need to learn to delegate better. The honest conversation will surface any of those first three difficulties (comfort zone, loss of identity, or fear of dispensability), and give you a chance to manage your beliefs and your self-talk in order to change your attitude.

The best way to reduce your worry about whether someone else will be able to complete a responsibility as well as you do is to learn how to delegate better. In my experience, this is the most common reason managers don’t delegate more. They’ve delegated poorly in the past, and has it come back to bite them (this happens in the movies, too), and so now they’re leery of delegating at all.

So, here are some key ideas about how to delegate more effectively, so that you won’t get caught, like too many unfortunate movie heroes, in a trap of your own making – where bad things happen (aliens not vanquished, secret not stolen, portal not opened) because you just couldn’t let go. Here’s our recommended approach:

Prepare: Before you meet with the employee to whom you’re going o delegate, take some time to define both the area of work you want to delegate and how autonomous this employee should be to start with in doing this work. Defining the area of work will give you a chance to clarify in your own mind the “size and shape” of this responsibility, so that you can communicate it clearly to the employee. You want to define the area as a whole, so that the employee gets a sense of the big picture. Often people make the mistake of inundating the employee with step-by-step specifics when first trying to explain a new responsibility. Remember, you’re not teaching the person how to do the responsibility at this point; you’re simply introducing them to the idea of taking it on. You’ll want to communicate an overall sense of the time and tasks involved; what a successful outcome looks like in this area; the key people involved; and a recent history of the project or responsibility and who’s been in charge up till now.

Defining levels of autonomy means deciding the appropriate levels of your oversight for the work. The best way to do this is to “unpack” the responsibility into its component parts according to how skilled or experienced the employee is in doing it—and then define how you’ll interact in each of those parts based on the employee’s skill/experience. For example, let’s say you’re a sales manager, and you’re delegating one of your client account to a salesperson who’s your employee. You know she’s great at dealing with with people at all levels. You’d put client relations as a “low oversight”—higher autonomy—part of this responsibility for her. Let’s say you also know that she isn’t so good with detailed follow-through. You’d put detail-orientation as a place for more oversight or coaching—less autonomy. (You can find out more about this approach to preparing for delegation in Growing Great Employees, which has a whole chapter on the topic, or in Leading So People Will Follow, which has a condensed version of the model in the chapter on Generous Leaders.)

Discuss And Agree: When you then meet with your employee, you’ll first share the definition of the area of work, and make sure there’s mutual understanding and agreement. Then you’ll share your “levels of autonomy” preparation in order to define how the transfer of responsibility will happen over time This is the most critical part of the conversation; be sure to invite the employee’s response to make sure there’s mutual understanding. Finally, you’ll ask the employee to put it all together by creating a written summary of what you’ve agreed.

Support: In this step, you both honor the commitments you’ve made in the delegation conversation, and you offer the employee feedback about how he or she is doing relative to the agreed-upon responsibility. Most important, you work to build the employee’s capability, and therefore his or her autonomy—so that ultimately this person is fully responsible for this area, with minimal involvement from you. No matter how well you complete the first two steps, without this third step it’s unlikely that the transfer of responsibility will work, so make sure you keep working with the employee to move the responsibility to “fully delegated.”

As we’ve learned from countless movies, effective delegation is the single best way for you to share power and authority. In movieland, it means the aliens get defeated, the villain gets foiled, the portal gets opened: the good guys win. In the land of work, it means employees get to demonstrate increasing levels of competence, to which you respond by offering them increasing levels of autonomy. They become more independent and capable, you’re freed to take on new, higher-level responsibilities—and you’ll develop a reputation as someone who is great at unleashing employee potential. When delegation happens well, everyone wins.