What Planet are You From? Five Ways to Get Along with People who Aren’t Like You 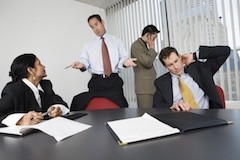 Almost all of us, at some point in our lives, have had to deal with someone where we’ve found ourselves thinking, Wow, what planet are you from?

Sometimes it’s a values gap—or perhaps more of an abyss; the person believes or espouses things that are very foreign to us. I often have that feeling when I’m talking to deeply religious people (I’m not), or people whose political philosophy is quite different from mine. It’s not an “I’m right and you’re wrong” response, so much as it is a real incomprehension: I literally don’t understand how the person can believe what they’re telling me. That’s one situation where we get that born-on-different-planets feeling.

More often, though, it happens when I have to interact with someone who simply behaves and responds very differently than I do. Where my actions don’t yield the kind of reaction I’m expecting, or where their approach to a particular situation is very different from what mine would be. For example, I have a colleague who operates at much slower pace than I do. Generally, when in conversation, I like to have a pretty fast give and take: someone says something, I respond; we talk back and forth, building on each other’s ideas. My colleague, though, likes to have time to think about what she’s heard. So rather than a quick back-and-forth, our conversations tend to be me saying something, her thinking, me saying something else, her thinking. Finally she might respond—but it’s often something like, “This is interesting—let me think about what you’ve said and get back to you.” Years ago, this might have driven me crazy. I would have felt impatient and probably made lots of negative assumptions about her—all the way from she has no sense of urgency to maybe she’s not very smart.

We’ve found, over the years, that these differences in behavior can be even more disconcerting than values differences, because they’re less “nameable” and more pervasive. That is, if someone is a devout Muslim and you’re a devout Catholic, you can easily name that difference and, for the most part, work around it in relating to each other. When someone is very intuitive and non-linear, though, and you’re very linear and logical—it’s much harder to name, and very difficult to avoid, because it will be a factor in nearly every interaction you have.


In our practice, supporting people to become more ready to lead, we’ve used a model called Social Style for the past 25 years to help our clients name and work more effectively with these behavioral differences between them and others. It’s such a useful model that we nearly always include it in our executive coaching engagements, and we often teach it as a group session for intact teams. Teaching you the model here would make for a way-too-long blog post (and wouldn’t be the best way to do it, in any case), but I thought it would be helpful to share with you five of the most important principles we’ve extracted from our work with Social Style over the years.


If you do these five things pretty consistently, you’ll have the beginnings of a planet-to-planet communication system that will help you create better relationships with people who are wired very differently from you:

Realize that other people are not you: One of the biggest problems in dealing with people who habitually behave very differently than we do is that we tend to assume that when they act in certain ways, it means the same thing as it would if we were doing that behavior. For example, if you’re a jokey, exuberant, gregarious person, and you were in a social situation being quiet and keeping to yourself, it would probably mean you were tired, ill, or in a bad mood. It’s important to remember that for a lot of people, being quiet and keeping to themselves is simply their default setting; it doesn’t mean any of the things it would mean if you were acting like that—they’re probably well-rested, healthy and perfectly happy! Their behavior simply doesn’t imply the same thing coming from them that it would coming from you. If you can remind yourself of this regularly, you’re less likely to make untrue negative assumptions about people’s behavior—and less likely to respond to them in unhelpful ways based on those assumptions (for instance, trying to “cheer up” a quiet, serious person who is feeling perfectly fine, thank you very much).


Match your speeds: Pace is one of the most common behavioral differences between people—and one that leads to a great deal of frustration and negative assumption. Some people prefer to speak, move, respond, even walk more quickly; others like to do all those things at a more deliberate pace. If you’re working with someone whose pace is very different from yours, you can immediately make it more comfortable for them to interact with you by slowing down or speeding up to match their pace. For example, in the situation above, where my colleague has a much slower natural pace than I do, I’ve gotten into the habit, over the years, of speaking more slowly, giving her more lead time when I’d like a response from her, and staying quiet while she thinks, in order to give her time to respond. I notice that she has also moved toward me: when we’re working together, she speaks a little more quickly than is “default” for her, is willing to respond and weigh in more quickly than might be completely comfortable for her. It may feel a little awkward at first—“pace” is a daily, unconscious habit for most of us—but learning to do this can help you work much more effectively with people whose natural pace is quite different from yours.

Start where the other person wants to start: When beginning a relationship, some people like to start by making a personal connection–even at work–while others like to move immediately to task—even in non-work situations. This difference, like pace, can lead to a good deal of misunderstanding and discomfort. If I’m a more relationship-focused person, and you’re more task-focused, and we’re just starting to work together—you may see my initial efforts to find out who you are and what you like as counterproductive and time-wasting, while I may see your efforts to start focusing right away on what we’re going to accomplish together as being a little cold and unfriendly. Neither is true, but these kinds of initial mis-matches can set a new relationship on a bad path. One simple thing you can do to avoid this: when you’re just meeting someone, look for their cues about how they’d like to start. If he or she starts getting right down to business–go with it. On the other hand, if he or she starts by asking you how you ended up at this company, or sharing something about his or her personal life—go with that. Generally, we’ve found that if you spend just a few minutes starting the interaction the way the other person prefers, they’ll then be willing to move to your preferred focus (if it’s different from theirs). Voila: everybody’s style needs get met, and your relationship is off to a good start.

Leverage complementarity vs. similarity: Many of us tend to gravitate, especially in work settings, toward people who are similar to us behaviorally. That is, if I approach a new project looking first to clarify the necessary processes, and organize the available information logically and sequentially, I’m more likely to enjoy and be attracted toward people who share my focus on process and information. I might be less pleased to be paired with someone who wants to focus first on results, or on brainstorming about possible approaches. However, over the years, we’ve seen that the most innovative and productive work partnerships and teams tend to result from a diversity of behavioral styles. For example, my business partner, Jeff, is much more likely than I am to want to do many iterations of a product or process, and to look for ways to take it farther or make it better: I tend to focus more on efficiency and simplicity. As we’ve worked together over the years, I’ve been helped tremendously by him to be more patient in letting things unfold, and to be willing to contemplate new and powerful possibilities that I would have walked right past in my quest for a quick solution. He has said that working with me has helped him to get better at bringing projects to a more timely conclusion, and to look for a simpler way to do things. Working with people who are very different from you can assure that a variety of strengths are brought to bear on a given project–and it can put more tools in your own toolkit.

Start from neutral: The most unhelpful reaction to differences in behavior is to assume that behavior that’s different from yours is worse. We often make these assumptions unconsciously. Negative assumptions about people whose pace is different than ours is a great (and all-too-common) example. People who are faster often think of people who are slower as “not able to keep up” or “risk-averse” or even (as I noted above) “not too bright.” People who are more deliberate in their pace tend to think of faster-paced people as “impulsive,” “not thoughtful” or “pushy.” Someone I used to work with was quite serious and very logical. When she had to work with people who were more intuitive and playful than she was, she would often label them “unprofessional.” One day, the penny dropped for her, and she realized that it would be much more productive for her to shift her thinking from “others are less professional than I am,” to ”not everybody is wired like me.” If you can see differences neutrally—as simply different vs. worse—it will open you to creating better, more productive and respectful relationships with a much wider variety of people.