Why We Hate Giving Feedback—and How to Make It Easier 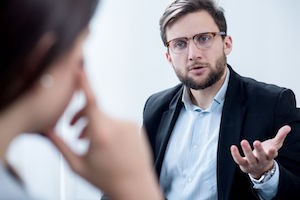 Over the past two decades, my colleagues and I have coached and trained thousands of people to be better managers and leaders. We’ve asked many of them what they consider the most difficult part of being a manager, and almost without exception they’ve replied: giving people corrective feedback.

Many have said it’s even worse for them than firing people—when you fire someone, it’s a difficult thing, but then it’s done. I have encountered a handful of managers who say giving tough feedback isn’t hard for them—but they’re the rare exception.

Why is it so hard to tell our employees (or our spouses and friends, for that matter) that they’re doing something that’s not working, and needs to change?

Most often, we’re worried about the other person’s reaction: What if she gets angry? What if he cries? What if she tells me I’m an idiot? What if he gets super defensive and starts blaming me? Another thing that makes it hard is not knowing what to say. “I can’t actually tell that person I think he has a bad attitude,” we say to ourselves. “He’ll just tell me he has great attitude, and that I don’t understand/like/respect him, and it will go from bad to worse.”

With all that running through your head…it’s easy to convince yourself it’s not that big a deal, or it will go away, or—this is the worst—If that person were really a good employee, he/she would figure it out and just stop doing it. That can make you, the manager, feel completely justified and self-righteous about not giving the feedback. I’ve seen way too many people ultimately lose their jobs because their boss was too much of a chicken to give them the needed corrective feedback—and then made it their problem for not magically knowing what they were doing wrong!

As a service to humanity—and you, the poor beleaguered manager—here are two helpful tips for giving corrective feedback in a way that both reduces the other person’s defensiveness and makes the feedback actionable—that is, makes it clear to the other person what you’re asking him or her to change.

Listen first. This may seem counter-intuitive; if you’ve finally screwed your courage to the sticking point, you probably just want to get it over with. But I strongly encourage you to start by letting the other person know that you’d like to talk with them about something, and then inviting them to share their point of view. This might sound like, “Jack, I’d like to talk about the XYZ Project. What do you think has been going well, and not so well?” That both gives the person a heads-up about the topic, and lets them know that you’d like to hear the balanced picture (that is, that you’re not just wanting to focus on the good news). If you then make the effort to simply listen, without interrupting or disagreeing, all kinds of good things can happen. First, you’ll find out what the other person thinks—which gives you really valuable information about how to respond. Sometimes, the other person will actually say pretty much what you were going to say—and then it just turns into a coaching conversation! Quite often, the other person will see part of the problem, and then you can pick up on and clarify what he or she has said. And even if the other person is completely oblivious to the situation, just listening first will make the conversation much less adversarial, and will generally make him or her much better able to listen to you when you respond.

Camera Check. The other most useful tip I can give you is to use something we call camera check. This involves giving feedback about people’s behaviors—instead of about their mental state. Let’s use the example I gave earlier, where you’re thinking about an employee, “you have a bad attitude,” but you know if you say that, it won’t help, and will probably make the situation worse. A comment like that is almost guaranteed to make the person feel defensive….you’ve basically just implied he or she has a character flaw! Also, you’re giving the person absolutely no indication of what you want him/her to do differently: what would having a “good attitude” look like?

Instead, do a “camera check”: take a mental videotape of the person doing what you call “having a bad attitude.” What do you see on the imagined tape? You might see him or her showing up late for work, saying negative things about other people or about the company, consistently refusing to help colleagues when they ask for support. Those are things you can tell the person: “John, I notice you’ve come late to work several times over the past month, and I’ve overheard you saying some pretty negative things about Susan and Jeff to other employees.” It’s still not easy to hear—but it’s a LOT easier to hear than “you have a bad attitude”—and it’s much clearer what you want the employee to do differently.

(If these two ideas seem useful to you, you’ll find a more in-depth explanation in Growing Great Employees.)

It’s worth getting reasonably comfortable and skillful at giving your employees corrective feedback. Otherwise, they’re flying blind. When you let people know what they need to do differently in order to improve and be more likely to succeed, you’re helping them, yourself, and the organization.